The board of the Netherlands Society for Epidemiology is very pleased to offer the VvE Achievement Award to: 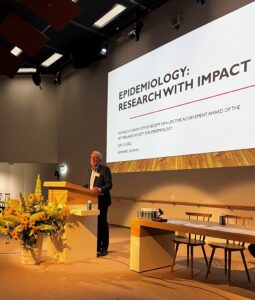 Professor Gerhard Zielhuis is one of the most famous second generation Dutch epidemiologists. Gerhard is one of the founding fathers of the Biomedical Sciences curricula in the Netherlands. Together with his Nijmegen colleagues, he developed the epidemiology training program that became the solid foundation for the careers of several hundreds of members of the Netherlands Society for Epidemiology (VvE). A training that was based on a predilection for methodology, which had been imparted to him by his predecessor Ferd Sturmans.

At least 10 of the current professors of epidemiology in the Netherlands have been trained by Gerhard. Many of the infectious disease epidemiologists who have appeared in the media in the last two corona years owe the basis of their expertise to Gerhard. Through these non-hereditary descendants, he has had an indelible influence on epidemiological research in the Netherlands. Where many people especially get a kick out of a great research result, Gerhard’s day is a success when he is again allowed to address an epidemiologist at their graduation. Proud as a peacock when seeing the development of that person during the Biomedical Sciences training and beyond.

Students outside Nijmegen also know Gerhard as a trainer. Through his wonderful practical Manual for Medical Scientific Research (Handleiding Medisch Wetenschappelijk Onderzoek). Or the Textbook of Epidemiology (Leerboek Epidemiologie) by Bouter and van Dongen that Gerhard rewrote from A to Z in just 10 days.

Gerhard himself put his methodological feats into practice within the Ear, Nose and Troat (ENT) medical discipline by means of the KNOOP research. A large longitudinal study of middle ear infection in children. A study that would last almost three decades and showed, among other things, that the standard placement of eardrum tubes does not make sense. The research would become a kind of paradigm for the current ZonMW Doelmatigheidsonderzoek.

After his active research career, Gerhard became director of the national String of Pearls project and director of the Radboud Biobank. Positions that suited him because they facilitated others. Selflessness is perhaps the best description of Gerhard. In addition to countless other positions, his position as chairman of the Netherlands Society for Epidemiology (VvE) and as a very active fielder for the VvE within the European Education and Training Committee also fits into that picture.

The VvE Achievement Award has been awarded on June 10, 2022, at the WEON congress of Epidemiology organized by Radboudumc Nijmegen, the Netherlands. The selection has been performed by members of the organising committee of the congress and the board of the Netherlands Society for Epidemiology.